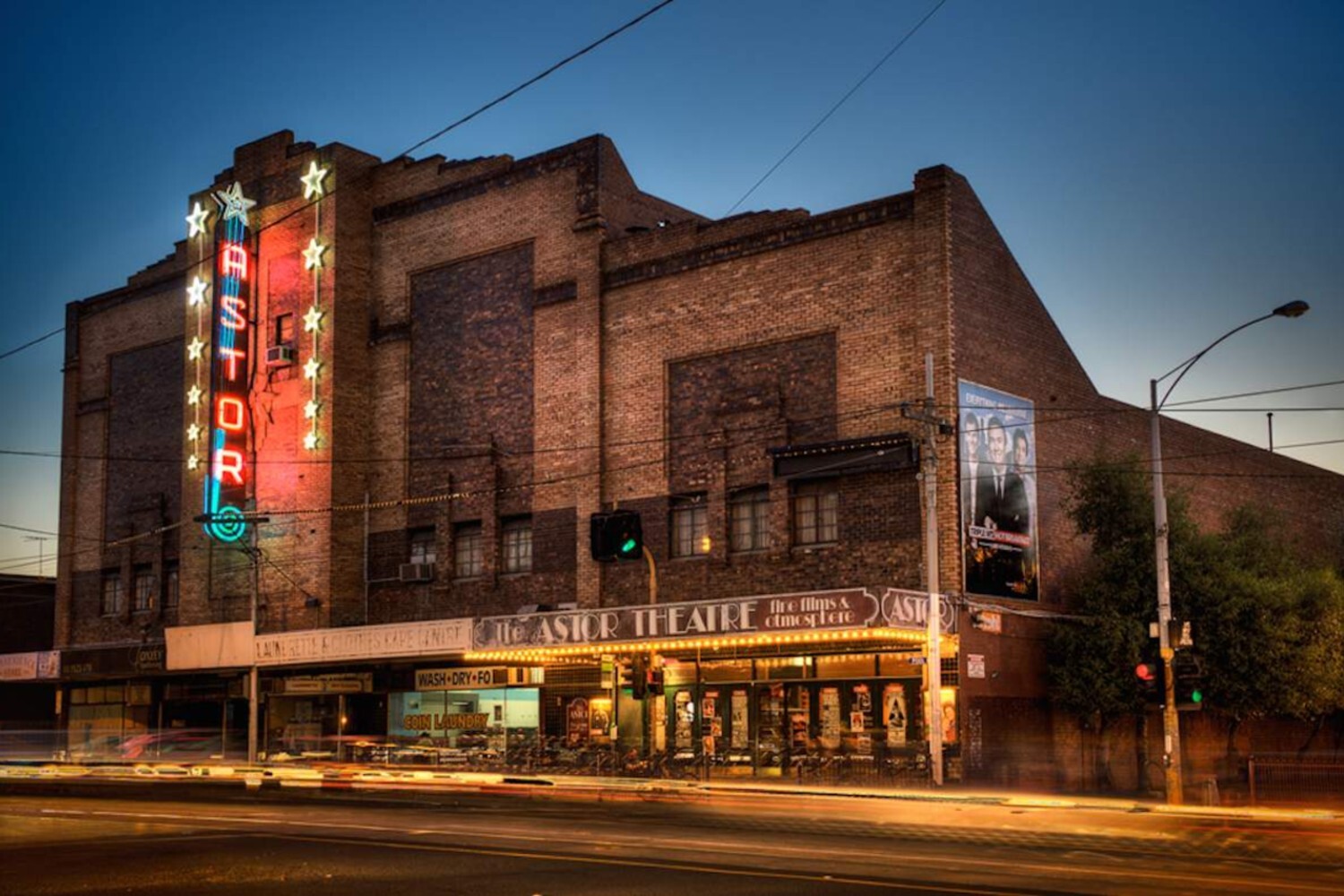 The Astor
Words by Riley Barber

Like most businesses, cinemas were hit hard by the pandemic – particularly independent cinemas. But with theatres now fully reopened, and plenty of great films showing at the moment, it’s the perfect time to support Melbourne’s vast selection of independent picture houses.

There is no independent cinema in Melbourne more well-known and loved than the Astor Theatre. Based in St Kilda, the 85-year-old cinema is the last single-screen cinema of its kind in Melbourne and is even listed on the Victorian Heritage Register. Not to mention, The Astor even has its own resident cat, Duke.

Find Astor Theatre on the corner of Chapel St and Dandenong Rd, St Kilda or head to their website to see what’s showing.

Located in the inner-west suburb, Yarraville, this beautiful Art Deco theatre boasts eight individually named, boutique cinemas. Sun Theatre originally opened in 1938, so it has plenty of character and history and is beloved by locals. There’s also a bookshop next door for you to browse while you wait for your movie to be called.

Find Sun Theatre at 8 Ballarat St, Yarraville or head to their website to see what’s showing.

A staple of the Lygon St experience, this arthouse theatre is the largest independent cinema in the southern hemisphere, boasting 16 screens and a bar. Cinema Nova was established in 1992 and has been bringing some of the best arthouse, independent, Australian and international films to the cinephiles of Melbourne ever since. The theatre is also fully licensed, so you’re welcome to bring alcoholic beverages into most screenings.

Find Cinema Nova at 380 Lygon St, Carlton or head to their website to see what’s showing.

Located smack bang in the middle of the CBD on Collins St, The Kino is conveniently located for you to meet your mates centrally to catch a flick. The theatre has seven screens as well as a café and bar area perfect for pre or post-film catch-ups. The Kino screens a wide range of local and international features, documentaries, and mainstream films.

Find The Kino at 45 Collins St, CBD or head to their website to see what’s showing.

If you’re looking for a unique cinema experience, check out Thornbury Picture House. The 57-seat cinema is family-run and even has its own festival, the Northern Lights Film Festival, which showcases local short films. Thornbury Picture House screens a variety of new releases, documentaries, cult classics, and more. The cinema also hosts short film screenings, cast and crew events and film premieres for local filmmakers.

Founded and owned by Antonio Zeccola in the late ‘70s, Palace Cinemas comprises 180 screens across 24 locations nationally, including The Astor and The Kino. They also include Palace Balwyn in Balwyn, Palace Brighton Bay and Palace Dendy Brighton in Brighton, Palace Cinema Como in South Yarra, and Palace Westgarth in Northcote. And in case you were wanting to step up your cinematic experience, you can always catch a screening in the historic Pentridge Prison cinema.

Check out the session times at various Palace Cinemas here.

Located in Elsternwick, just five minutes from St Kilda, Classic Cinemas is brought to you by the same owners behind Lido Cinemas and Cameo Cinemas. Classic has ten cinemas, including a rooftop cinema and bar, and is located directly across from Elsternwick Station. Classic, Lido and Cameo are all also home to the Jewish International Film Festival (JIFF).

Find Classic Cinemas at 9 Gordon St, Elsternwick or head to their website to see what’s showing.

A building with a rich, eccentric history, Lido Cinemas has been many things in its lifetime before becoming the picture house it is today. Lido Cinemas includes eight indoor screens, a jazz room, AND a rooftop cinema for the warmer seasons. The theatre resides in the heart of Hawthorn’s bustling Glenferrie Road and is easily accessible via public transport.

Find Lido Cinemas at 635 Glenferrie Rd, Hawthorn or head to their website to see what’s showing.

Why not venture out east to Belgrave and catch a screening at Cameo Cinemas? Like its sister cinemas, Cameo comprises multiple screens, and in the warmer months (December to March) offers an outdoor cinema experience. But even as the colder weather prevails, you should still check out the classic 1930s cinema.

Find Cameo Cinemas at 1628 Burwood Highway, Belgrave or head to their website to see what’s showing.

Want a different kind of cinema experience? Check out our list of the best drive-in cinemas in Victoria. Held on a remote island, 'Flow State' is RISING festival's most exclusive and intriguing offering