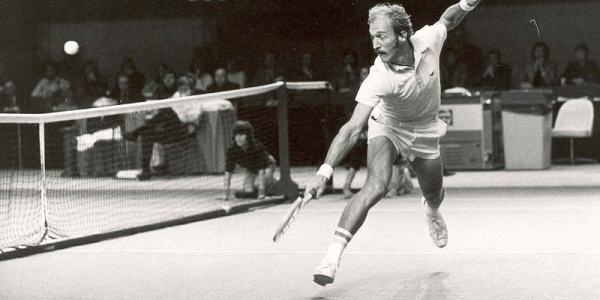 In the 1970s with the rise of athletic ware behemoths Nike and Reebok the ‘sand shoe’ went the way of the dodo. Well that was all designs apart from Converse’s All Stars and the Adidas’ Originals.

Since the then the Adidas Originals has gone onto sell 40 million pairs with it becoming synonymous with street culture, hipsters and even dressed down glitterati. With the shoes’ omnipresence, this year Adidas have decided to celebrate the shoe in 2014 by inviting artists, designers and street artists from around the globe to give the classic shoe a makeover.

Last Tuesday night the Melbourne leg of Stan Smith Exhibition was launched at FortyFiveDownStairs with it showcasing designs from both Melbourne’s artistic and street art scene.

Beat caught up with designers Lucas Chirnside and Bianca Looney company SMLWRLD to discuss their interpretation of the design brief Slower, deeper, wiser that  involved marinating then air-locking the shoes like butcher would a fine cut of meat.

The title comes from a Michael Leunig cartoon parodying the Olympic motto of Citius, Altius, Fortius (Faster, Higher, Stronger). Looney has this to say about the title of the artwork and the overall theme.

“Sporting culture is very much elitism with the key goal to be stronger, faster or higher but we wanted to highlight that other ways of thinking that can have a profound impact – the power of the meek and the voiceless,” contends the artist of the team, before adding, “It throws the spotlight dually on sporting culture and other movements like the ‘slow food culture’.”

Chirnside – an architecture aficionado – quickly adds, “It’s also about growing and preparing food with the onions, the garlic and the herbs all grown in our kitchen garden – it was cool to conceive something from seed through to artwork.”

“But also I think the theme is throwing back to the age of the design of the shoe. It has been around for 40 years, not only the shoe but Stan Smith the athlete as well. So time has led to a ‘deeper’ and ‘wiser’ outcome because it isn’t the fastest tennis shoe and Stan Smith is not the fastest tennis player anymore but there is a profound accumulative value,” concludes Chirnside.

The preparation of Adidas Originals was undertaken as though it was a cut of lamb with SMLWRLD taking the Stan Smith shoes to Donati’s Fine Meats in Carlton where Chirnside and Looney literally strapped on the aprons and got to work.

“It’s trussed up like a roast with a recipe that would make for a quite tasty roast if there was leg of lamb in there. So it’s juniper berries, white pepper corn, garlic, thyme, bay leaves, olive oil and balsamic vinegar,” explains Looney of the ‘recipe’.

“So we’re preparing the shoes and the marinate at this old school butchers in Carlton with opera music blaring and working right beside actual butchers preparing meat!” explains Chirnside.

The appearance of the shoes in air-locked bag is that of a well worn sneaker that has been around traps but they are in fact a brand new pair of shoes. “It’s the balsamic vinegar in there that has given them that aged look!” laughs Chirnside.