Following an absolutely dynamite debut at Melbourne International Comedy Festival last year, Scout Boxall (2021 Best Newcomer nominee) is bringing that trademark manic energy back to the festival with Buck Wild, a show that offers a peek inside their glitching, shimmering, elastic bipolar brain.

Directed by Michelle Brasier, Buck Wild is an immersive hour of carefully organised cerebral chaos with interwoven stand up, stories and original songs that defies genre, gender, common sense and the Diagnostic and Statistical Manual.

They joke the show is eligible for Medicare rebates of up to $128.40 on a Mental Healthcare Plan.

So you were nominated for Best Newcomer at Melbourne Comedy Festival last year. How are you going to follow this with your new show?

By winning Best Newcomer. Honestly the show last year did incredibly well and we sold out and added extra shows, we got all this beautiful feedback from reviews and award nominations.

I feel like people put pressure on their second show, but my goals for this show are very different. The show last year was very non-linear non narrative, this show is very narrative driven –  a much more creatively intense show to put together. It’s a show with a very important story in it and a lot of heart in it.

The new show is closer to a theatre show than just a rag tag collection of sketches;  the amount of soundscape elements and tech elements have already far surpassed what I was able to do last year.

What was the process and inspiration behind getting the show together, what inspired you there?

Well, basically it’s a show about being bi-polar. I think it’s a show that I’ve probably mentally been sitting on for a while, I wasn’t really sure what form it would take but I knew comedy would probably be the best vehicle; to essentially show what it’s like with a bi-polar brain while keeping it immersive and interesting. It really pulls the audience in but is also able to keep people comfortable enough and laughing enough that it’s not like overwhelming or overbearing.

I think there’s been a real shift in comedy to I think, you know, in the post Nanette world to drag out trauma to try and get reviews or win awards. This is less a show about dragging out trauma than looking at how different brains perceive and process the world around them. It’s way more interesting than being like, “This is my bi-polar sob story.”

Can you talk about the main themes of the show?

I mean the core central theme is bipolar and living with bipolar, there’s shit about everything really. I mean I have stuff about the formula one which I’m obsessed with and I have a sketch about fucking dolphins. I have a bit about someone who is very emotionally unavailable but very fuckable, that’s fun.

If someone hasn’t seen you perform what can they expect from your show?

They can expect very high energy, hi octane stan-up with very poetic soundscapes. I’d like to think it operates between beauty and “Wow this is the dumbest thing I’ve ever seen in my life.”

Why comedy as a way to express yourself?

I kind of fell into comedy by accident, I never thought I would do comedy but I studied Shakespearean theatre from a literary perspective and thought I might be a writer or an academic. It was kind of accident but then I realised it was the thing I was always built to do.

Comedy is the most expansive and accessible artform. Like if you ask people, “Do you like comedy?”  Most people say yes but everyone means a different thing. The history of comedy is so rich with people pushing boundaries.

My favourite thing about Joan Rivers, for example, is she was always the smartest person in the room saying the dumbest shit in the best way and she basically revolutionised women and how women in stand-up comedy were percieved. She was able to tread of line of being outrageous but also keeping people onside.

What do you like most about performing live at Comedy Fest in Melbourne? What’s the kind of vibe that you’re feeling?

I think last year the vibe was kind of fucked, it was an amazing festival and I had a sick time but a huge part of the festival is the sense that comedy can feel like a bit of a lonely thing to do because it’s just you on stage;  you’re going out to a gig somewhere in Warrandyte and you’re sitting on the train for like an hour and a half by yourself then you get there and you do your five to 10 minutes and then you get on the train and you come back home and it can feel quite lonely.

During festival time it’s a proper community that kind of blossoms in the city and it’s a really amazing thing to be a part of when you’re just walking from gig to gig and venue to venue and you’re bumping into people and you get to meet people that you consider your heroes.

It’s almost like the city comes alive during festival and I think punters experience that as well. I feel like this year with most covid restrictions gone the city’s going to just like crack open.

During festival time do you have any favourite spots, secret hang outs that you want to reveal?

Yes, right number one is Udon Yasan, cheap as chips and it’s right near Comedy Republic which is a great venue. Number two, Pellegrini’s, also on Bourke Street, and number three there’s a pizza slice bar on Myer’s Place which is right near the Improv Conspiracy. Those are top three food picks.

In terms of hang outs, everyone hangs out at Festival Club or whatever it’s called now and Cabinet Bar,  they would be my main places.

And the last obligatory question, do you have a favourite heckler moment?

Absolutely. I was doing crowd work and was the first non-dude on the line-up and this guy just, like, rears up from out of the crowd he’s so fucking wasted he can’t even articulate what he’s saying and he sort of like starts stumbling towards the stage. I’m trying to banter with him because that’s the best way to diffuse the situation but he was so fucked that I couldn’t even understand what he was saying so I couldn’t  even banter with him.

And I was like, “Fuck is this man going to come on stage and physically fight me?”  And I was ready to physically fight this man on a tiny stage, then another comic – a staunch guy from WA with a mullet came and sort of like shepherded this guy out of the gig. Yeah, it was sick, it was very, very funny.

Scout Boxall’s Buck Wild is going down at Comedy Republic on Bourke Street from March 30 until April 24. Head here to book tickets and for more information. 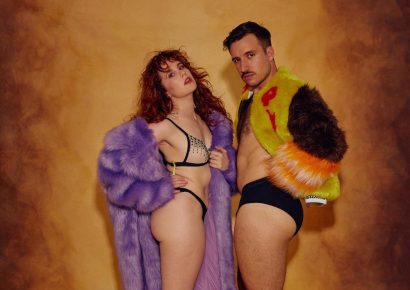